What did you bring? he asked. He squared his stance and reached out his hand. He wrapped his fingers around the edge of my car door and swung it shut.

Pebbles scuffled underfoot as I turned to match his stance. Meat, I answered and tipped up on my toes and wrapping my arms around his neck.

And? he asked and returned the embrace.

Charcoal, I answered. I pointed the remote toward the truck and pressed the button until the latch unhitched. We both watched for the slight upward movement at the seam.

And? he asked again. We turned back to each other.

The spark, I said, and I pulled back and turned to the car to unload my bags. 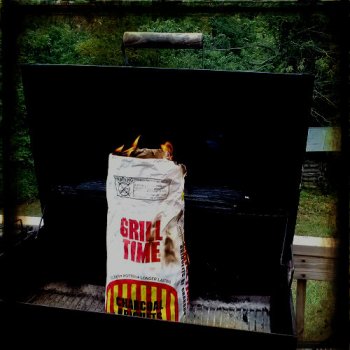 What do you want to drink? he asked. He walked across the tiny kitchen and opened the refrigerator. The ceiling light dimmed, and brightened.

I looked up from my seat at the table. He was already reaching inside. Beer, I answered. I put the knife on the cutting board and pushed them aside, then used my toes to push back the opposite chair.

He opened both bottles and slid mine across the scuffed surface. He sat down and leaned his elbows on the table as we watched the bottle skip across and settle with a graceful thud. The lights dimmed again. I reached for the bottle and he reached for my hand. The lights brightened, taking my attention from the connection.

The spark, I answered, and I squeezed his hand before he moved it away.

What do we have to start it? he asked. We stood shoulder to shoulder on the cabin deck.

The twigs we used to draw straws, I suggested, holding out my short stick. Or the bag it came in, I added. He reached out and took the stick from my hand, regrouped it with the cluster in his, and set them on the ledge.

And? he asked, smiling as he turned back from arranging the pile. I handed him the match box.

He slid the box apart with one finger, drew out a match, and then used it to close the box. He turned to the pit, drew fire with a single swift strike, and, in the same motion, dropped it in the bag of coals.

The spark, I said, and he kissed me until the fierce flamed settled into an ember glow.

*Featured image and post images are mine. Photos taken in Deer, AK in July 2013 at a cabin that came with coordinates, not a street address. There is a true story to these pictures, but this is not it. Images created at Pixlr.
**The ads (which may appear) below are not mine, but they keep this free for me. Do with them as you choose.

There you have it. Your turn. Cancel reply

If you build it…

Of course, we won’t mind if you look around.

She smells weird, but we love her anyway.

This work is licensed under a Creative Commons Attribution-NonCommercial-ShareAlike 4.0 International License.

This work is licensed under a Creative Commons Attribution-NonCommercial-NoDerivatives 4.0 International License.